This post was written by Mark Teitell and Monica Chi, and originally published by DEG: The Digital Entertainment Group.

The first problem you have to deal with is your own reaction. You will not be able to solve anything outside until you own how the situation affects you inside.

Pursuing “success,” most people instinctively rely on the American work ethic formula: work hard, be smart, and push through obstacles to emerge victorious. This heroic model works well, especially when the path to success is clear – and the market you’re in is growing.

But what happens when disruption is in the air and change is so rapid that longtime, even iconic, institutions are struggling and disappearing – and even the path to success is murky? Industry circumstances are contributing to the turmoil and related anxiety, including: consolidation (e.g. Disney’s Fox acquisition); the sudden shift to multiple, fragmented competing distribution platforms (Warner/HBO, Disney, et al.); the role of advertising business models; and continuing uncertainty about whether (and which) technology will bring new waves of growth. Under circumstances such as these, how can you show up and be an effective leader that others are inspired to follow?

Good news: there’s an alternative to the heroic model that will serve you better during tougher and easier times. Rather than trying ever harder to outsmart and outhustle the world, what if you could capitalize on today’s challenges as a catalyst for approaching yourself and your leadership in a next-gen way? Doing so requires a conscious shift, but the algorithm for navigating the chaos is both clear and repeatable – and never more relevant than today in the shape-shifting world of entertainment.

Let’s take a look at each of the five foundational elements now. 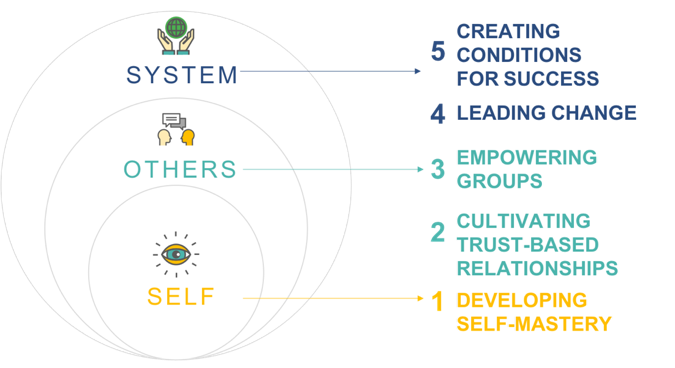 Yeah, we know – this sounds like something from The Karate Kid. Yet this is real and starts with quieting down enough to hear your own thoughts and sense your underlying emotions, while neither suppressing them nor being carried away by them. The more you notice and accept these parts of yourself with equanimity, the less you’ll be driven by the natural insecurities and fears that are part of being human. Instead, you will begin to recognize your “way-of-being” – your ingrained and (usually) invisible pattern that, while serving you well, also has by-products that inhibit the fullest realization of your goals. This heightened awareness will open you up to “seeing” anew, even in a job and industry you’ve assumed you’ve known inside and out.

In dynamic times, relationships matter more than ever. Evolution has imprinted deeply on all of us that to feel alone is to feel unsafe. And on a more analytical level, not a single one of us has the superior ability to predict how the world will evolve. So, logic would dictate that for both emotional and career-navigation reasons, you ought to invest energy in reconnecting old relationships, nurturing current ones, and seeking out new people (including ones outside the echo chamber of your specialization).

The key is developing genuine trust – a tremendous and teachable skill that is essential to your success (and happiness). What builds trust? For starters, the self-awareness and courage to be authentic and, yes, vulnerable with colleagues. Although wearing a suit of emotional armor or a mask of overinflated confidence seems like it would be “easier,” doing so will result in missing out on the human connections that are vital for keeping things in perspective and generating new thinking, and also makes it incredibly difficult to get hard stuff done in the workplace.

Without a doubt, every major studio and corporate establishment is now deep in the question of how best to create diverse, equitable, and inclusive environments, while also tackling the issue of attracting and especially retaining the best junior and mid-career people. With the sizzle and reward of start-ups and tech giants beckoning, this has become more challenging than ever. There’s no silver bullet to resolving issues as complex as these, but a no regrets move to empowering others is fostering a clearer sense of purpose, connectedness, and belonging.

As you start to increase self-mastery, strengthen trust-based relationships, and empower and motivate others, this possibility arises: what should you do with this increasing power to operate as your best self? That’s always an important question, but never more so than during disruptive times like these. What new strategies or business models – and cultural traits and ways of working – does your company need? Identifying and executing on these types of fundamental changes takes significant leadership.

As history has shown over and over again, most great leaders aren’t born. They’ve intentionally nurtured leadership qualities and honed them through trial by fire. This is where proactively finding sources of support to resource yourself is a tremendous accelerator.

This final element builds on each of the prior components. At the end of the day, there is only so much that one leader, however capable, can “do” on their own. Success in times of rapid change is contingent on teams of people being clear and aligned enough to execute and persist in mission. The extent to which you can cultivate an environment where people feel psychologically safe enough to experiment, share learnings, and forge ahead will make all the difference – and this holds true whether you are leading a team of five individuals, 500, or 5,000. Your ability to do so hinges on your own clarity – starting with the awareness you have day-to-day around your leadership impact, and what you’re willing to do about it. In other words, “knowing” the five-part algorithm for leading effectively is only half the battle…

So where to begin? Courageously taking an honest and clearer look at yourself than ever before is a fail-safe starting point. From there, as you work to expand your leadership repertoire with distinct new ways of thinking and being, you may find yourself relating to colleagues and partners in refreshing new ways – and discover a curious ability to better handle the curveballs life’s circuitous path throws at you.

At its core, leadership is about the ability to leverage paradox. There are five polarities that are…

I lead the executive coaching practice at The Trium Group, where we serve senior leaders and their…

With vaccination rates climbing, many companies are now considering how they’ll get their leadership teams working together…

Those who are replacing poor or controversial leaders have a special challenge. Every leader who fills a…

One of the great challenges that all human beings face is aligning their behavior with reality. This has…

In the last year, as leaders have been navigating unprecedented levels of uncertainty and anxiety, our clients…

It’s no secret that the Bay Area is one of the highest-priced labor markets in the country,…

This piece was written by Doug Randall and originally published on Real Leaders. A global pandemic. Civil…

As a management consultant, I get asked for advice all the time on a wide range of…

Regardless of your political persuasion or orientation, it would be difficult to not admire Joe Biden’s journey….

We are thrilled to announce that our Founder and CEO, Andrew Blum, was named a Top 25…

Who doesn’t like a good dog story? This is also a leadership lesson that resonated strongly for…